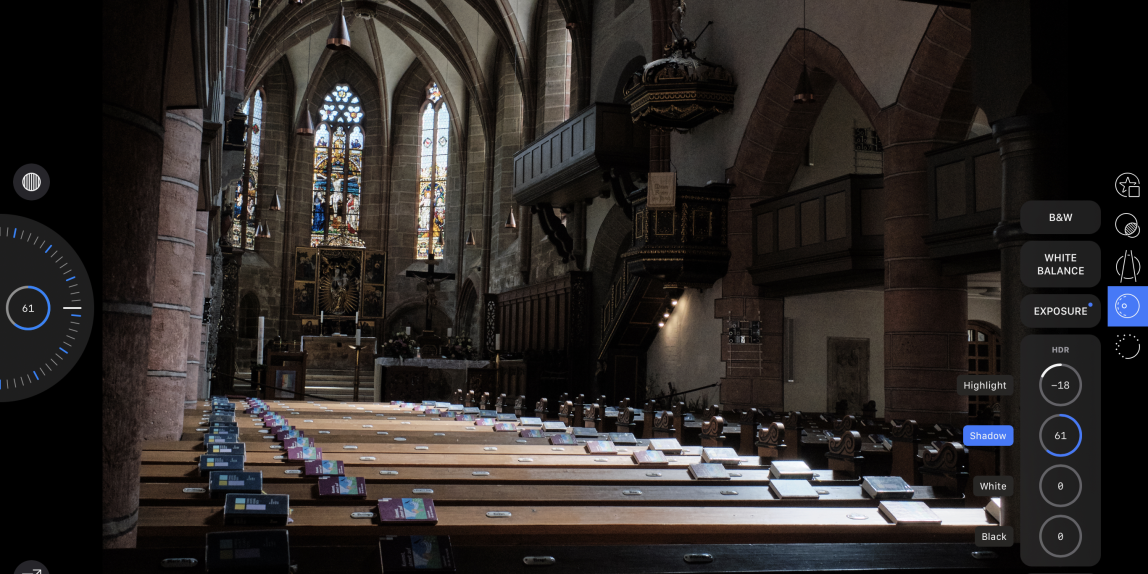 I tested C1 for iPad on my 12.9″ iPad Pro intensively throughout the beta period and I then had a free week on the release version to decide whether I want to pay $5 a month for it. My feelings are very mixed. Even though the quality of the tools it does include is outstanding, the extremely limited feature set and the primitive cloud sync that is really just an image transfer function all make it very restrictive.

I’ve decided to subscribe for a while to see how much I use it and if it improves. I’m also keeping it for the time being because it is so good at getting the best out of iPhone RAW photos. But if it doesn’t improve a lot and soon I don’t think there’s any way I’m going to go on using it long term.

That is literally everything. There is nothing else, even though the original announcements promised layers, brushes and much more besides. Clearly, the development team discovered that they had bitten off more than they could chew.

The list of what the iPad version doesn’t have includes most of what makes Capture One on the desktop good:

The user interface is intelligent, well-organized and intuitive. In particular the adjustment wheel on the left for changing the value of the currently selected tool is a great solution. However, since there are no brushes or layers, you can’t really do anything meaningful with the Apple Pencil except select and adjust the tools.

Quality of the tools and Fuji RAW handling:

On the positive side, the image quality of all the tools that are actually there is superlative. All the RAW processing is some of the best I’ve ever seen, on the iPad or on the desktop, including Fuji RAW. It also does a better job of processing iPhone RAW files than any other tool I’ve ever tried.

You can also create and save your own presets and apply them to entire batches of photos, for example to show the images to a client directly after a shoot in something slightly better than an unedited state.

So the developers have clearly focused on getting what they have included right before moving on to additional features. Hopefully, more is coming.

There is a limited but meaningful set of options for exporting your edited images. The EIP setting includes all your adjustments so that you can transfer the image with non-destructive edits to the desktop version.

Limitations of the tool set:

However, if you actually want to do serious editing on the iPad, the small set of tools is very limiting, particularly the lack of brushes, layers and masks (which also makes editing with the Pencil pointless). When working with Fuji RAW files, the quality you do get is outstanding, but you’re stuck with the film simulation you set in the camera as your starting-point. It’s also very frustrating that there’s no way to import your styles and presets from the desktop version.

Limitations and benefits of C1 Cloud:

Capture One Cloud is very limited and limiting. Frustratingly so, and it’s also difficult to find. There’s no reference at all to the feature anywhere in the user interface. After stumbling around for a while, you eventually figure out that you have to first create an “album” of photos. Then you select the album and then (and only then) you can find the option to transfer to C1 Cloud, which is well hidden in the three-dot menu next to the album name. Nastrovya!

In its present form, all that Capture One Cloud can really do is make it easier to copy your files from your iPad to your desktop environment. And this is only necessary because of the almost non-existent file handling and transfer capabilities of iPad OS. Otherwise even that would be redundant.

Unlike Lightroom for the iPad, you get no synchronization of your edits between the two platforms. You can copy your files in the EIP format with your non-destructive edits so that you can continue editing on the desktop, but it’s pretty much a one-way street.

If you want to go back to the iPad with edits you’ve added on the desktop, then you need to repeat the process in the other direction. Really, you are only copying the files from iPad to desktop via Capture One Cloud.

C1 Cloud benefits, such as they are:

Also, since there’s no synchronization there’s no reason to leave your files on the cloud. You can remove the albums from the cloud as soon as you’ve transferred them, and that makes the one thousand image limit (without any megabyte specifications) acceptable, as the cloud is really only a waystation. There’s plenty of space for transferring all of even a big shoot, provided it’s less than a thousand images.

This makes it an easy way to do some quick edits on the iPad and then move to the desktop. But you cannot edit simultaneously on both platforms as you can in Lightroom, and once you’ve moved to the desktop you pretty much need to stay there.

If you’re all-in on Capture One on the desktop, the iPad version can be a valuable addition, even in its present limited form. You can quickly load up your shoot on your iPad and do some quick edits, and it makes it easy to show your shots to clients in a nice form, directly on site. Then you can transfer to the desktop version and go on working there.

If you’re looking for an iPad editing tool you can achieve very high quality edits for both RAW files and JPEGs provided you’re satisfied with the very, very limited available toolset. However, if you want more advanced editing, there are still much better options available, including and especially Lightroom on the iPad, which also gives you much deeper cloud Integration and the ability edit in parallel on both platforms. And in Lightroom on the iPad you get the magnificent new AI masking, which isn’t even available on Capture One on the desktop.